As another 1.5 inches of rain fell on Indianapolis yesterday, neighborhoods like Frog Hollow (I love that name!) and Ravenswood, which were already battling flood waters are hit hard again. The city closed 12 streets, mainly in these neighborhoods and along Fall Creek and in a neighborhood on the southside near Troy and Harding streets which are flooded and impassable. The river is expected to crest this afternoon. UPDATE: Emergency crews are evacuating people from 78th and Keystone area due to the White River flooding. 16 people were rescued by boat from their homes. The attached photo show the level of water in that area. Emergency personnel also evacuated people from the Ravenswood areas. 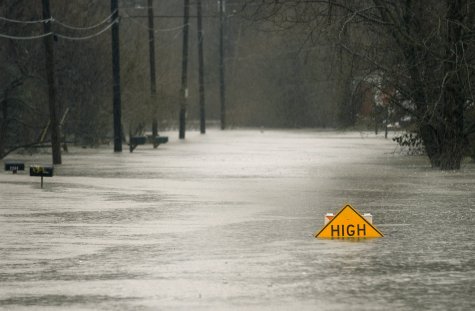 According to the Indianapolis Star:

Before changing to snow Thursday, 2.66 inches of rain had fallen in the Indianapolis area since Sunday. That’s on top of 6 inches last week. So far this month, 9.04 inches of rain has fallen; normal for the entire month is 2.48 inches.

Indiana rivers were already higher than normal due to the heavy snows in December and ice storms in January.