A few weeks ago, I made an impulse buy – something I’ve wanted for a long time, but didn’t really need. I bought (used) an Olympus EP-2 camera, and a Lumix 20mm f/1.7 lens to go with it. It’s very similar to my Olympus e420, but a bit smaller, with a more retro design. With an adapter, it can use all the lenses I have for my e420.
I definitely didn’t need it; my e420 is only two years old, and is a fantastic and reliable camera that I am completely happy with and intend to continue using regularly.

The ep-2 does some things the e420 can’t, like HD video. But there are things it doesn’t do – it doesn’t have an onboard flash, for one thing, or a viewfinder. 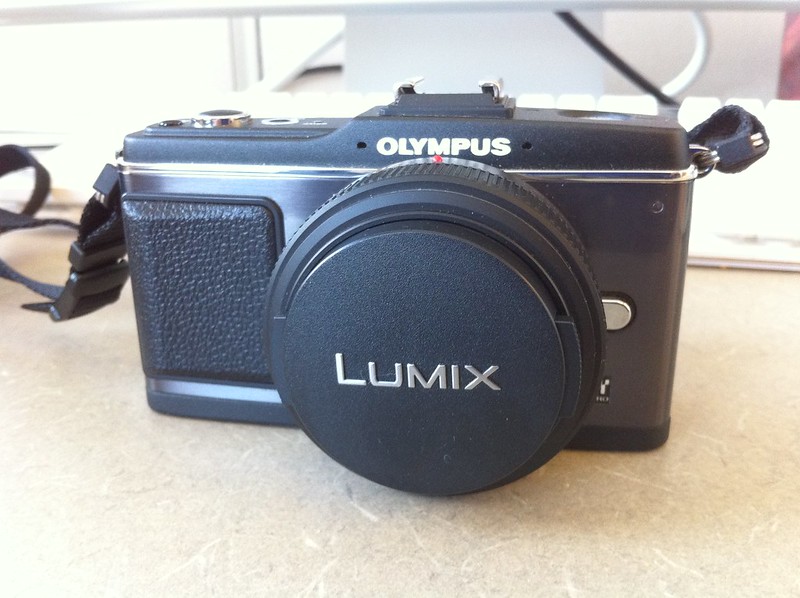 The thing about the new camera – I adore it. I really do. It just looks cool. And it’s smaller – not a whole lot – height and width are almost the same. But the thickness of it without the SLR mirror and viewfinder is hugely different, and the retro feel of it is just awesome. It was modeled after the über-popular Pen film cameras from the 1960s:

This last image compares previous model of my new camera to the size of an old Leica and the old Olympus Pen cameras – it’s even smaller than those very portable popular film cameras that were the choice of lots of well-known photographers from that era.

And people react differently to this – more like it’s a snapshot camera than an SLR. It’s shocking what a difference that makes to people who see you using your camera. No one takes a snapshot camera seriously or thinks twice about what you’re doing when you snap a picture.

So – I have two cameras. I’m torn about the impulse, because spending money on something I didn’t need is foolish. But this camera is awesome. I’m not looking for absolution here; I know I should have waited a lot longer. But I’m hoping that if I choose the path of getting tons of use out of both cameras, I will be taking advantage of the money I spent well.