I drive north on college from downtown everyday on the way to work on the north side. And every day I pass this cool fake S.W.A.T. van (which appears to be an old delivery van repainted) that’s usually parked on the street near the intersection of 49th Street and College Avenue. And everyday, I think, “That’s cool. I wish I could drive around in a fake S.W.A.T. van.” 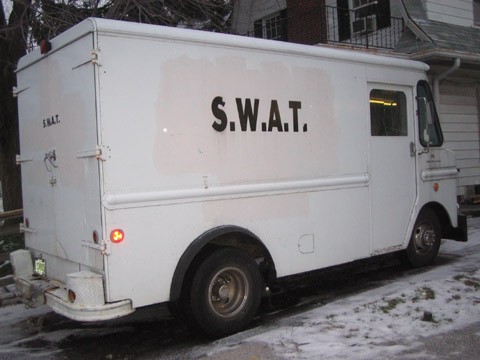 Fake S.W.A.T. van
So the other day I pulled over, hopped out and took a picture of the van. When I got up close to it, I realized that the S.W.A.T. stands for “Siding With A Twist” which is written in small letters on the door. It also has a for sale number on it, but I wasn’t sure whether the “for sale” referred to the siding or the van itself. If it’s the van, then I guess I could drive around in a fake S.W.A.T. van. Which I have no use for whatsoever, but wouldn’t it be cool? 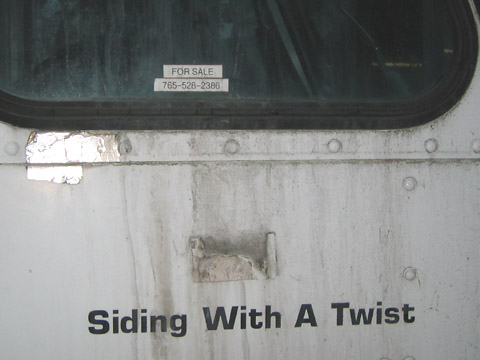 Close up of door

I’d seen this truck in the summer but didn’t manage to get a picture, so when I saw it today parked in Broad Ripple, I turned my truck around and drove back to get a photo. I plan on getting a radio flyer logo decal to put on my red pick-up, and this was the first other vehicle I’ve seen with a similar idea. 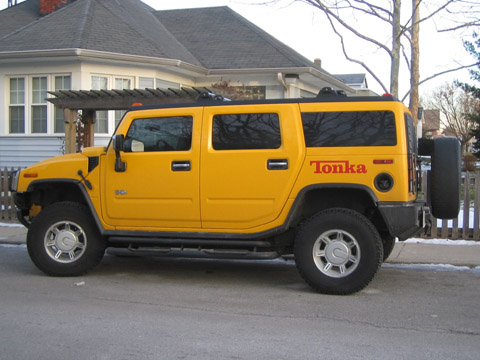 I happened to catch sight of this bizarre do-it-yourself truck in a parking lot. I thought it, too, was very cool. I waited around to try and meet the owner, but they never came out of the store. 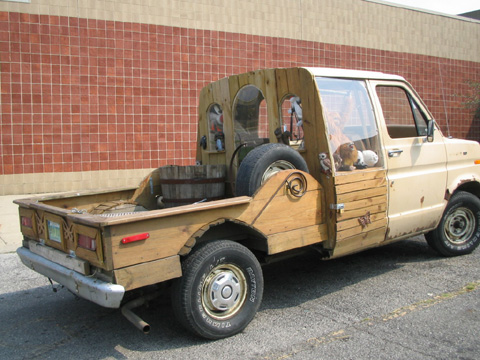 I especially like the scrollwork on the sides of the bed, and the squirrel stands on the back windows. That’s some funky stuff, there. 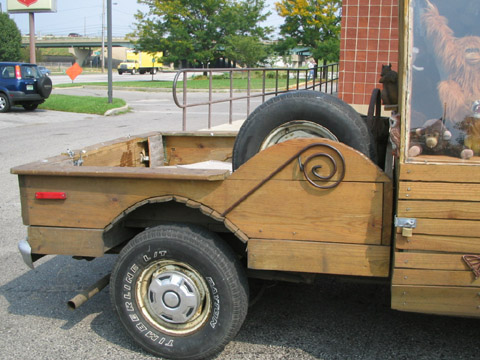 My friend Lisa from North Carolina has lots of friends who have turned their cars into “Art Cars” and she’s planning to do the same with her old VW van; she’s going to make a giant high-heel shoe. 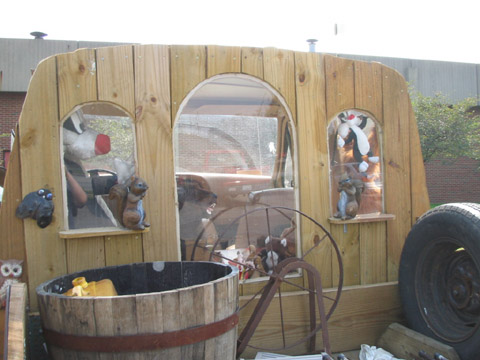 I happen to see these two cars regularly on the way to work; I’m usually driving behind them. I love a good bumpersticker, but I don’t think I’d ever apply one directly on the paint of my car, like both these guys did, with new cars, too. 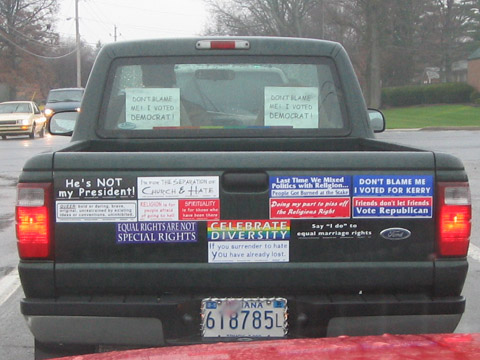 This guy in the truck was really unhappy about the election. 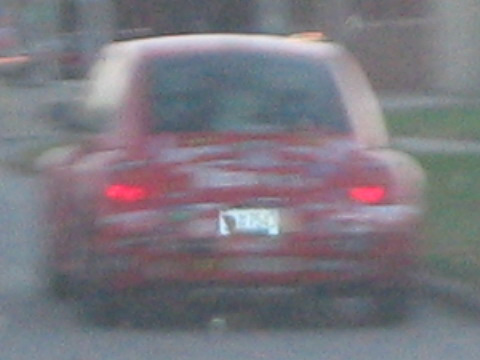 Where this guy is just really into his music.

The Ubiquitous “shoes on a electric wire” photo

Dunno what makes people want to do this, but it seems to be a time-honored tradition. 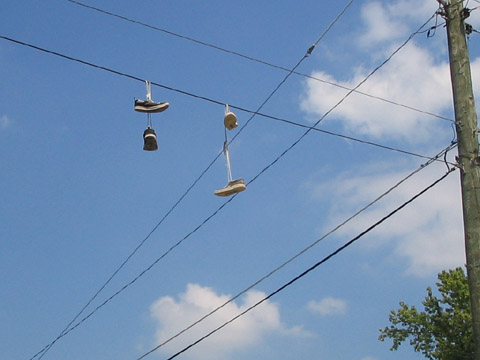 I almost forgot the main reason I was writing this article — the Fake Orthodox Jews. The other day when I was driving south on college, I passed Park Tudor school, north of Broad Ripple. On the east side of the road, standing in the parking lot for the Marott Park, there were two guys dressed as Orthodox Jews, who were playing tamborines and dancing in hoe-down fashion. I’m not kidding, I swear. I was not dreaming, nor was I high, drunk or otherwise intoxicated or hallucinating. It was two guys dressed in all black, with long black coats, hair with side curls, black hats… dancing and playing tamborines. I was also not the only one who saw it; everyone in traffic slowed down.
I thought it might be an advertising stunt, protest, or theatrical production, but there were no signs

indicating what might be going on. Just two guys, some tamborines, and a car. And the hair didn’t look like wigs, either, which made me wonder if they were in costume or if they were really Jewish — a notion that I rejected immediately as too outlandish.

If the traffic had not been so busy, I would have whipped the car around and driven back to find out what was going on. Instead I called my girlfriend on the cell and described the scene. The only thing I can think of, is they must have lost a bet. Or won one.