Back in the early nineties, I lived in the Marleigh Apartment building in the 1400 block of Delaware in downtown Indianapolis, which is in Old Northside neighborhood. Across the street was an impressive array of old Victorian houses with all the gingerbread and other bling they put on houses back in the 1800’s. I used to walk down the street and daydream about owning one of them. One day on a walk, I stumbled across something really strange.

Between two of my favorite houses there was a well-manicured empty double lot, and I noticed a winding cement path down the center of the lot, between two deep depressions in the ground. In the depression closest to me, I saw a circular cement disk, and I wondered what it was, so I walked out to the curvy path. When I got to the middle of it, it dawned on me; I was standing in the middle of a giant yin-yang Tao symbol, on the path between black and white. 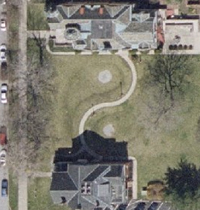 It was the size of the entire lot, about 80 feet across, but it was so subtle that you couldn’t really see it from the sidewalk. It was a very impressive piece of landscaping, and I wondered who created it. The winding pathway connected the two houses together, and it may have been intended for no more than that, but it was really cool, and what was most interesting was that it was hidden in plain sight. From these aerial photos it seems really obvious, but from the street you can’t see it at all. (click on the thumbnail to see a larger view).
I was able to determine, by looking at the city website’s aerial photography map pages, that it was created between 1965, when there were two houses on the lots, and 1976, which is the first photograph where it’s visible.
I went back a few weeks ago to take photos of it, but it was gone. They had paved over it to make a parking lot for one of the two houses, which are currently occupied by businesses. Yet another spiritual mystery killed by commerce.
But it lives on in aerial photos of Indianapolis, which is what counts, I guess.