One of the first stops for the Giant Red Arrow in its tour of Indianapolis cultural events is the Georgia O’Keeffe exhibit at the Eiteljorg Museum. My familiarity with O’Keeffe was with her paintings of flowers and of animal bones in western landscapes, but Georgia O’Keeffe: Visions of the Sublime contains only a few of those paintings, and includes 39 paintings of quite different subjects: Lake George, rivers, horizons, pueblo buildings and even Canadian and Hawaiian scenes.

They span about fifty years of her career, from the 1910’s, while she was an art teacher showing her work in her future husband’s New York gallery, to the 1960’s, long after she left Alfred Stieglitz and moved to New Mexico to paint its extraordinary landscape. 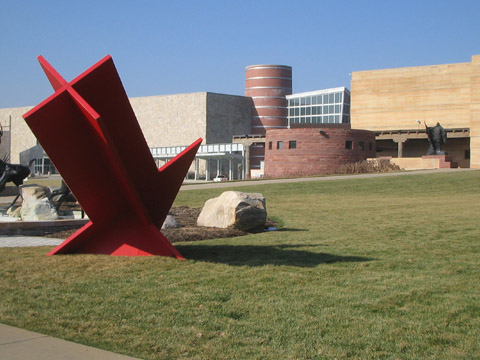 The collection is designed to show works that have not been seen before, and to convey O’Keeffe’s concept of the “sublime” in her work — to express ideas, inspired by the sky and landscape, that are “lofty, grand, or exalted in thought, expression, or manner; tending to inspire awe.”
We went through the exhibit on a Saturday afternoon, and while it wasn’t elbow-to-elbow crowded, there were enough people visiting the exhibit gallery that it made taking time to observe the paintings difficult. In addition to affecting the flow of movement, the crowd meant hearing other people’s commentary on the paintings, which was also bothersome, although I was amused to hear that I was not the only person who uttered the words “female genitalia” during our gallery visit. I’d suggest visiting the exhibit in a less “prime time” day or hour so you can be leisurely and enjoy the work and your own reflections on it.
I thought the exhibit was laid out nicely, although there were some lighting issues — direct spotlights on a few of the paintings caused a glare and obscured the subtle color, and required me to stand in odd spots to see details of the works well.
The paintings displayed here are essential to our understanding of O’Keefe’s whole body of work, and provide greater insight into her vision of the natural world both abstract and real. I tend to be more awestruck, though, by the more familiar O’Keeffe paintings of bleached dead bones against the infinity of the sky, and of flowers in bloom, that look to me like, well, female genitalia, which are visions of the sublime in their own way.

Although at the end of her life O’Keeffe downplayed the influence her husband, modernist photographer Alfred Stieglitz, had on her career, this exhibit examines that concept by including 25 of his photographs, some of which provide a different context of some of the same natural landscapes that O’Keeffe was painting, and also some that were portraits of O’Keeffe during various points in her life.
Included with the exhibit are paintings by other 19th century artists that were supposed to fit in with the theme of the “Sublime.” They were so different from the abstracts and simple patterns in O’Keeffe’s work, though, that I think the significance of what that part of the exhibit was meant to convey about the concept was lost on almost everyone, including me. It may have been that they were displayed around a corner from the other work, but it almost seemed they weren’t a part of the same exhibit.